If you look me up on Amazon, you'll see at least 5 books. That's because once you've published on Amazon, the book(s) you can never, ever remove a book from their site. The books stay until the Sun grows old, becomes bloated, red hell, and all live on Earth is extinguished.

So, to help simplify things, only two of the listed books are currently real. I have extensively edited and updated the content of the two books. If you have an interest, only look at these entries:
Strange Stories found here:
https://www.amazon.com/dp/B07N7SBPDP

This is Dream Walking in Shorts edited, improved, expanded to 9 stories instead of the original 4.

This is Secret Warriors, Psychic Spies: Based on a True Story extensively edited. I have removed about 20,000 words. The stories they told were personal and valuable to me but added little to the true story of the Center Lane project. What I kept, and improved, was only the story of Center Lane, the days immersed in the experiment in alternated states, and the related events that occurred weeks or years after.

Ignore the Dream Walking in Shorts titles. I have unpublished them, but they won't go away.

Posted by Rmannon at 7:55 AM No comments:

Number 1 for a Little While!!

Number 1 in its category for while this morning!!

New e-mail service for questions, and/or remarks about the book: Secret.Warriors@rmannon.com 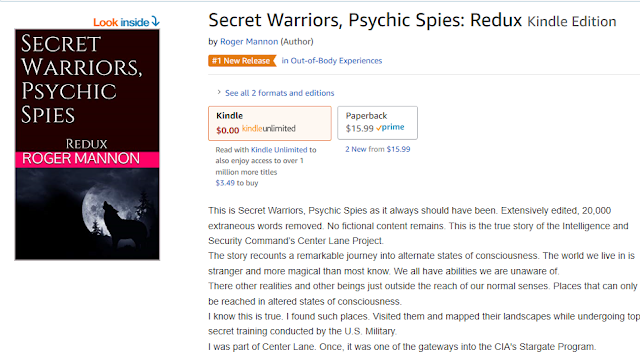 Posted by Rmannon at 9:23 AM No comments:

Seven Days on the Mountaintop Learning to Leave my Body Behind.


Seven days atop a mountain learning to disassociate spirit and body. We entered altered states of consciousness, freed our minds to travel to remote locations, alternate realities, into the future.

Day 1 – An old friend and spirit companion, the wolf, greets me in a desiccated winter forest.

Day 2 – Leaning to eat the universe’s energy, use the power to reach distant locations. The wolf meets me again and shows me three paths. Which one to take is a decision I must make.

Day 3 – I walk among the stars and travel to a world made entirely of multi-colored crystal.

Day 4 – A fellow trainee leaves this reality and cannot find his way home. He is taken away, no longer part of the experiment.

Day 6 – I meet a friendly alien creature in my trip to an alternate reality? Or was it a real world in a parallel universe or different dimension?

All this and much more:

Posted by Rmannon at 9:19 AM No comments:

This is Secret Warriors, Psychic Spies as it always should have been. Extensively edited, 20,000 extraneous words removed. No fictional content remains.

The story recounts a remarkable journey into alternate states of consciousness.
The world we live in is stranger and more magical than most know. We all have abilities we are unaware of.
There other realities and other beings just outside the reach of our normal senses. Places that can only be reached in altered states of consciousness.

I know this is true. I found such places. Visited them and mapped their landscapes while undergoing top-secret training conducted by the U.S. Military.

This is the true story of the Intelligence and Security Command’s Center Lane Project.
I was part of Center Lane. Once, it was one of the gateways into the CIA's Stargate Program.